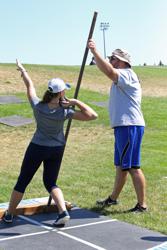 Our coaching staff has a proven record of helping young throwers improve and excel. The majority of our staff have been working together for many years, including 6 coaches who have been participating since the inception of the camp and over 25 coaches who have at least 10 years of camp experience! Needless to say, a well coordinated learning environment and consistent teaching progression are the hallmark of our technical sessions. Most importantly, all participants have the exciting opportunity to work directly with world renowned experts in each individual throwing event – unlike our competition at other “track and field” camps.

As usual, several outstanding collegiate, high school and club coaches will join these elite clinicians in providing elite instruction at our camp. A complete list of our 2022 camp staff will be posted here no later than one month prior to the start date of camp. Provided below is a listing of our current administrative staff and former camp staff members to help demonstrate who will likely be participating at camp in 2022.